Learning a little about Jessica’s genetics

We had a phone call from Southampton a couple of weeks ago. They had been in contact with Dr Fowler, the pathologist, with regards to some genetic analysis that had been done on Jessica. This showed that Jessica had a small area missing from one of her chromosomes. 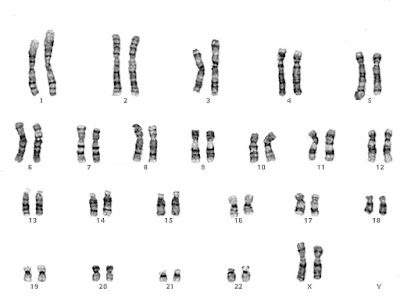 Whilst it was unlikely that this deletion had any impact on what caused Jessica’s death, Michael and I were referred to the geneticist at Oxford for a blood test to see if either of us carry this mutation. As we hadn’t received an appointment for this when I went for my antenatal appointment last week, it was chased up by the obstetrician. It turns out that there is actually quite a long wait normally to see the geneticist but me being pregnant has helped significantly speed things up in this regard! This morning, we had an appointment at the John Radcliffe for the genetic test.

The geneticist doesn’t think that this very small deletion is significant either with regards to Jessica’s heart condition or her death. There is a rare neurological condition associated with the deletion but this only occurs in adulthood and the deletion would need to be on both chromosomes in the pair. Jessica would therefore have been a carrier for this condition. It is likely that she inherited this from one of us but it is highly unlikely that we both would carry this deletion. In terms of the post-mortem results, she feels that it is, in her words “a red herring”.

Our impression is that this test is being carried out just as part of gathering as much information as possible from Jessica’s tissue samples. We had our blood tests done this morning and it will take about six weeks before the results come back from these. This also means that we are unlikely to receive any results from Jessica’s post-mortem before this time as well. We don’t yet know if there have been any other results from the post-mortem which may shed any light as to what caused Jessica’s sudden death. We will update again when we know more.

Email ThisBlogThis!Share to TwitterShare to FacebookShare to Pinterest
Labels: update